We all know when it comes to Asian/Chinese cooking, woks are typically involved. A wok typically has a rounded bottom and high sides, and most have two handles while some only have one handle. Round bottom woks are great for allowing heat to distribute evenly as opposed to a saucepan allowing food to not only cook quicker but to cook evenly. The high walls on a wok make it easier to toss food such as stir fry allowing ingredients to be mixed thoroughly. The way it works varies between Cantonese vs. Mandarin woks.

These days, woks are used globally and for so many meals. You’ll find that most woks are made from some sort of metal including cast iron, carbon steel, or aluminum, etc. You’ll find several woks are made from carbon steel allowing them to be built to last and offers a non-stick cooking surface for easier cooking. Woks are also lightweight allowing them to be easy to work with even if you have a larger wok.

Woks are one of the most versatile cooking utensils to have in your kitchen. They can be used for several cooking recipes allowing you to expand on what you already know. Because you don’t need a lot of cooking oil, clean-up is simple and food is just as delicious.

There are several different types of woks to choose from, and unlike a typical frying pan that can allow for oil or other liquids to soak your food while cooking, a wok allows liquid to be evenly dispersed while cooking preventing soggy food. When it comes to choosing a wok that’s right for you, you may find there are several types to choose from. For instance, Cantonese or Mandarin woks. Let’s take a closer look at the differences between these two woks and how they can benefit your kitchen.

Mandarin woks are typically called Northern Chinese woks. Mandarin woks will typically have one long handle on them. They don’t have a shorter handle, or helper, as the POW woks have. The long handle is made from different materials such as wood, bamboo, aluminum, stainless steel, etc. depending on how the overall wok is made. They typically have a round-bottom design. They can be made from different metals including:

Mandarin woks are great for using with intense heat such as with cooking stir fry. Mandarin cooking hallmarks can include intensity and speed. These types of woks are great for searing meat as well. These woks make great stir fry woks as they offer the space and design to flip while cooking.

You’ll find there are wok rings that work perfectly with a Mandarin wok as they help concentrate the heat more on the bottom of the wok. These make great rings to use when you are going to stir fry foods.

ZhenSanHuan is widely recognized for its high-quality cookware, and this wok is no different. This wok is made of high-quality carbon steel making it a tough wok. The added appeal of the hammer prints gives this wok a unique look. You don’t have to worry about the non-stick surface falling off as there are no coatings put on this wok before being available.

The ZhenSanHuan wok is a great pick if you want something that’s durable and going to withstand high temperatures. It’s a well-built wok that you’ll have around for many years unlike some other woks on the market. Other than it being heavy, as it is a cast iron wok, this wok is sure to bring much-needed convenience to your kitchen with its wide versatility.

This durable, yet lightweight wok is just what every kitchen needs. This wok offers an improved design making it resistant to cracking where the handle connects to the wok itself. If you’re looking to whip up some of your family’s favorite Chinese cuisine dishes, this wok is essential to have in your home. The round bottom makes this wok an ideal option for cooking over gas flames.

The Town Food Service wok is just another great wok you can look into while you’re in the market for a new one. The 8” steel handle makes it easy to flip food, and because it’s lightweight, you don’t have to be a weightlifter to work with your wok! In fact, this wok weighs a mere 3.5 pounds making it a lot lighter than most woks.

You’ll find this wok is built to last making it as good of an option as a cast iron wok. Some consumers have stated there are sharp edges on the top of the wok’s edges, but these can be drilled off easily without damaging or ruining the quality of your wok.

If you’re looking for a well-designed wok that’s going to make cooking in the kitchen enjoyable and fun, this wok is just the thing. If you take cooking Chinese dishes seriously, this wok is essential. This Cooklover nonstick wok made from aluminum offers a reinforced aluminum body that ensures your food is cooked evenly. This wok heats evenly preventing food from being overcooked or undercooked. The body measures 2-2.2mm in thickness making it lightweight and easy to work with.

The Cooklover nonstick wok is great value for the price you will pay for it. It’s great for a quick stir fry meal or another favorite dish. The nonstick surface can make cooking even eggs or cheese an easy clean-up. There are no screws on the body of the wok meaning you won’t have to deal with rust spots where the screws typically are. The wok comes pre-seasoned which saves you a step when it arrives. While you might see that the non-stick coating comes off if you maintain your wok chances are you might not have these same bad experiences.

Cantonese woks are often referred to as Southern Chinese woks. These have two smaller handles, one on each side. These types of woks are sometimes shallower than a Mandarin wok.   These woks are great if you want to cook a larger meal for instance, for a dinner party. It makes it hard to flip foods with two handles, especially if you are cooking stir fry.

Typical cooking tools you’ll use with this type of wok can include a ladle and shovel which are perfect for moving food around. Wok rings designed for this type of wok typically sit lower to the heat source and allow the heat to spread out evenly.

Some of my top pics for Cantonese woks are listed below, along with some features, pros, and cons of each one.

Lodge Pro-Logic Wok with Flat Base and Loop Handles, 14-inches

Probably one of my top picks of Cantonese woks is the Lodge Pro-Logic wok with flat base and loop- handles. This wok is designed from cast iron. Allowing it to retain heat a lot better than some other metal woks. You’ll be making everything from stir fry to a delicious vegetable sauté. This wok offers a flat bottom, which is ideal for all cooking surfaces, even electric.

The Lodge Pro-Logic wok is a great choice if you want a Cantonese wok that’s going to last you for years to come. You don’t have to worry about seasoning this wok either as it arrives seasoned already. Cleanup is as easy as warm, soapy water. If you can handle the heaviness of a cast iron wok and don’t mind spending a few extra dollars on a lid, this cast iron wok is one of the better ones out there to choose from.

The Kamado Joe KJ cast iron wok works great for cooking up some of your favorite Chinese-inspired dishes. This wok works great with Big Joe and Classic Joe grills among many others. With a cast-iron design, this wok was built to last and withstand the highest temperatures. Cast iron woks such as this offer heat retention and are great for cooking on a barbecue surface. Once you season this wok, you’ll never have to worry about food sticking keeping your wok in tip-top shape.

The Kamado Joe KJ wok offers versatility which opens up even more dinner possibilities. You can use this wok on the grill, or you can use it on your stovetop or induction range. As it is cast iron, you will find that it’s a bit heavier. For some people, the handles might be a little small for your hands, but this wok has received some amazing feedback from satisfied customers.

Cast iron woks offer amazing heat retention properties which allow for even cooking without overcooking any part of your food. The Backcountry Iron’s cast iron wok is great for searing, stir-frying, and much more. It’s extremely versatile, and you can use it on just about any surface from induction to even in the oven. Cooking your favorite Chinese dishes just got a lot easier with this wok.

If you’re looking for a versatile wok, this is just what you’re looking for. It’s going to allow you to cook even more food than you have been. Because it can be used in the oven and even on the grill, this makes cooking just about anything you want possible. Some customers have seen some early rust happening, but if you clean and take care of your wok as you should, this should be a minimal issue. You should avoid putting your wok in the dishwasher as well, as it is cast iron.

Why Should You Purchase a Wok?

For most people, woks are a great addition to have in the kitchen. Woks have turned into an underrated kitchen appliance, but if you want to make a killer stir fry, you’ll need to buy one. Here’s a few things you can do with your wok that you might not have realized. 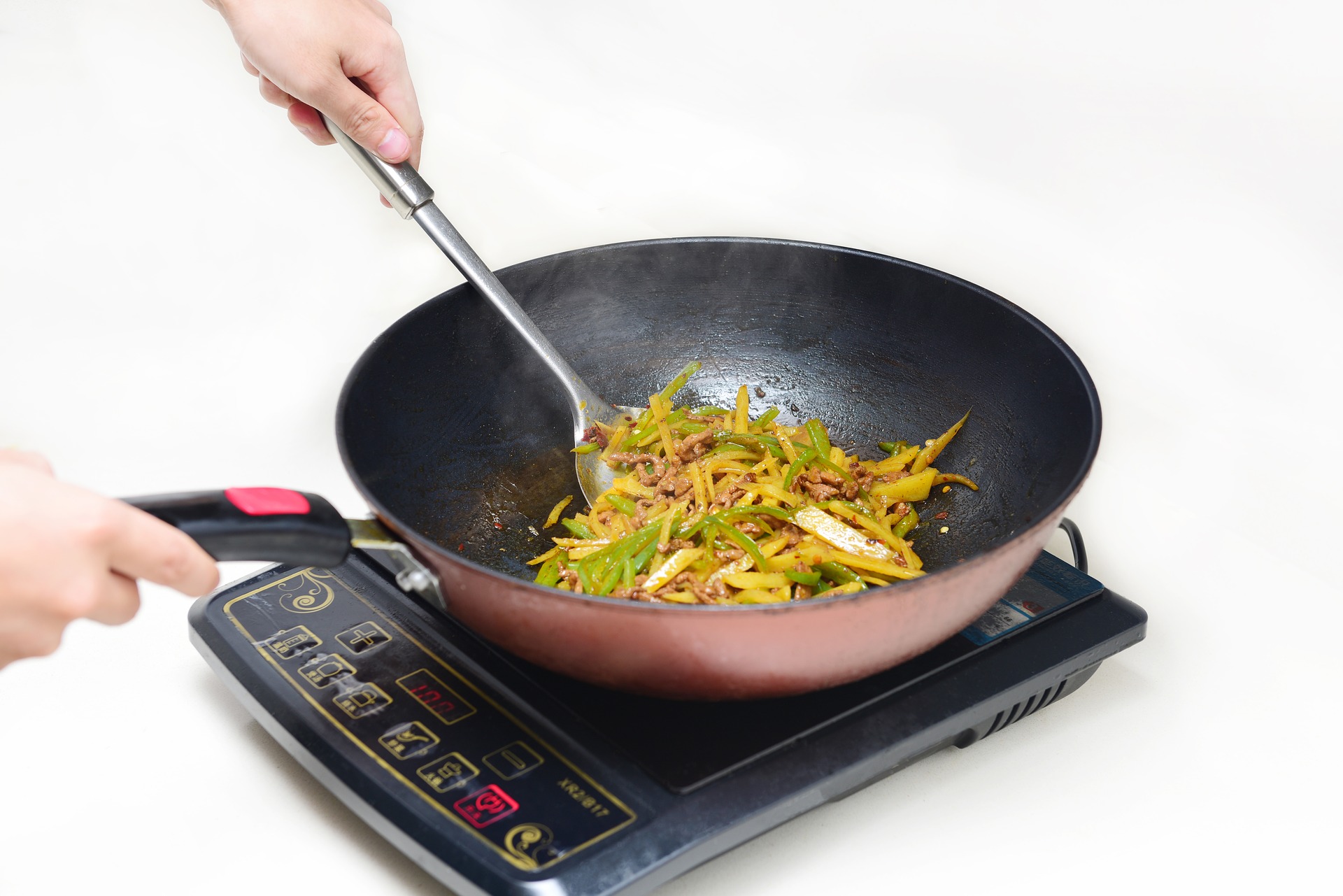 One of the most popular uses for a wok is stir-frying. In the olden days, most woks were made to have a round bottom. This allowed them to fit into most Asian stovetops. They didn’t have flat surfaces to cook on which is why woks were the main tool used for cooking.

Constant stirring is required to keep food from burning and possibly sticking if left untouched over high heat. Cooking stir fry in a wok is beneficial because it allows you to make larger amounts for those dinner parties you host.

Stir fry is cooked over high heat, so make sure the wok you choose can withstand high temperatures. The last thing you want is for your wok to become dented or warped while cooking.

Steaming isn’t something you’ll find people doing with woks. Steaming for many people isn’t necessarily done for its health benefits as you end up using more butter or oil to make foods palatable. Steaming does the same thing boiling does, except with steaming, you get to use cool bamboo steamers for your vegetables. Keep in mind to use a handkerchief to line the bottom of your steamer to help reduce cleaning up food bits from between bamboo.

Steaming is great for reheating leftovers to prevent them from drying out. This is great for rice especially. It even lets you cook foods a little faster than if you were to boil water.

Braising is the easiest cooking style associated with wok cooking. Braising is also called homestyle cooking. It is the least messy way of cooking food in a wok. Boiling is also easy to do in a wok, but braising is by far the more common style of wok cooking between the two.

MyAsianCooking is supported by its readers. If you buy through our links we may earn an affiliate commision. Learn more.